The Life of Saint Tikhon of Zadonsk 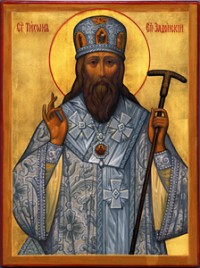 Saint John of Shanghai and San Francisco the Wonderworker chose Saint Tikhon of Zadonsk to be the patron of the orphange in Shanghai. Here is a summery of Saint Tikhon's Life.

St. Tikhon (in the world Timofei Savelievich Sokolov), was born in 1724 into a very poor family in the village of Korotsk in the Province of Novgorod.

Timofei entered a seminary in Novgorod, completed his course work at the age of 30 and decided to enter into monasticism soon thereafter. Timofei was soon raised to the rank of archimandrite and was appointed rector of the seminary of Tver. He gave lectures on moral theology, the first time in Russian instead of the Latin commonly accepted at that time, and at the same time the lectures were so fascinating that many people from outside gathered to hear him.

At that time the Synod was choosing a bishop for Novgorod, and thrice the lot fell to him, later he was appointed bishop of Voronezh.

In Voronezh, Bishop Tikhon found a huge, but neglected diocese which stretch from Orel to the Black sea. The clergy were few, and the people were wild, ignorant, and superstitious; and among the upper class, many were unbelievers. The young bishop applied himself fervently to his work; travelling, often simply on horseback, over his huge and rugged diocese. He instituted schools and preaching, none of which existed before he came.

Though his great efforts the light of the Gospel triumphed over the remaining pagan darkness of that area, but eventually the strain began to take its toll on his health.

He requested and was granted permission to retire at the Monastery of the Mother of God in Zadonsk. Here, he gave away all of his possessions, save only the most necessary. He also gave away his pension. He helped all those in need, and loved to gather poor children to himself to teach them prayers, and he gave them bread and small change; he always remembered his own bitter childhood.

For prayer in solitude he locked himself in his cell, and from there his prayerful sighs, "Lord Jesus, have mercy on me!" wafted to his cell attendants. He was seen bathed in the Light of grace. Once he was vouchsafed a vision of the Crucified Lord Jesus Christ.

Saint Tikhon spent his time reading the Scriptures, the Lives of the Saints, writing, attending the services, and in constant prayer. His schedule was also punctuated with deeds of mercy, receiving visitors, and working in the garden, which he greatly loved. He never refused to receive the poor.

His favorite occupation was his literary work. He would dictate to his cell attendants, usually striding about the room. His works are a favorite reading of pious Russian people to this day, and they have had a great influence on Russian religious literature and homiletics.

Who can recount the many wonders this holy man did, or begin to tell of his clairvoyance, his asceticism, and his love for his flock?

As the end of his earthly life neared, St. Tikhon dedicated himself to prayer and nearly complete solitude. Not long before his death, he saw in a dream that he had to climb up a tall ladder, and many people were following after him and supporting him. He understood that this ladder signified his way to the Kingdom of Heaven, and the people were those who heard him and would remember him.

[Summary of St. Tikhon's life from appendix A of "Journey to Heaven: Counsels on the Particular Duties of Every Christian" by Saint Tikhon of Zadonsk, Trans. Fr. George Lardas (Jordanville: Holy Trinty Monastery, 1991) ]